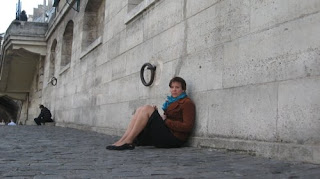 I know, I know - it's totally screwed up to have a blog with an entire section dedicated to how I feel about Paris, be in Paris, and still not update this blog. I need to be flogged.

~How I feel about Paris Today~

This is, incidentally, my last day here. (for now)
So I guess I feel sad about Paris today. happy to be off of French keyboards, but sad never the less. Paris is still Paris, open armed, jealous woman always trying to seduce me back into the whirlwind of cafes and stinky metros. She is of course more beautiful than ever, and her inhabitants chicer and nicer than ever as well.

I have had a great time here. I have been happy here. I have felt like myself again. After such a dramatic few months I was not sure how I would receive and be received here, but I'll be damned if it isn't the same old thing: I feel great in Paris, I love everyone, I love the French language, I found a new bar that is my FAVORITE, I found a new restarant that is my FAVORITE, I forgot how much I love Gouloise lights, I swear I would by a bike if I lived here, holy crap I MUST have those boots, blah blah blah... just like that.

Something did change this time though...something felt different. Paris is no longer an unaccesible dream in my head. I realized this time, that it is just a city. It happens to be the most beautiful city in the world in my opinion. I happens to own my heart, but really Paris is just a big, international city. My point is, it's accesbile. Of course I can live in Paris if I want, or anywhere in Europe for that matter. It is simply a matter of going. I just have to go. SO there it is, no more excuses. It's on me now to go.

I thought Paris was such a huge unaccesible dream because of the time I spent here; the anorexic, alcoholic dementia of many nights passed as a 22 year old. So being here now, 29, not anorexic (at all), short hair, life just having slapped the shit out of me, someone that works everyday, someone that takes ther friggin lunch to work with them...I realize that yes, I still want a life of markets and walking and people, close and everywhere. Yes i still want it, I am willing to desperatly long and pine over south georgia everyday, my father, my family, my piedmont park, but to live an ocean away. So again, I choose that. Thank you Paris.
Posted by A Brilliant Life at 7:16 AM No comments: