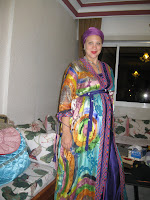 Tha kaftan is a traditional Moroccan dress reserved for special occasions such as weddings and pre-wedding celebrations. I have spent the past two months of my life fretting over my debut pregnant kaftan look. We were invited to a wedding that was deemed such a big deal that not just any old wear a kaftan any kaftan would do. I started my preparations at first mention of the wedding, having learned the importance of the kaftan from the last wedding I attended, which was two weeks after I arrived.

I bought the Femme du Maroc issue with the Marrakesh kaftan show photos. I picked out the cut and envisioned the pattern and material I wanted. I consulted with the family kaftan maker and picked out braiding to go with… and then I got busy and woke up with two weeks left until the wedding and no kaftan in sight.

That two weeks turned into one and then I spent almost every day for 7 days, trying to find a kaftan. I browsed in and out of shops, I was escorted into peoples homes and given kaftans to take with me. I had appointments set up with even more shops, learned that in kaftan rental protocol you do not, in fact, get to try on every kaftan you like. I was introduced to the market of kaftan rental shops that are not shops at all, but rather peoples homes, sometimes small homes sometimes sweeping villas full of women trying on hundreds of kaftans in the back rooms.

I got my hair done, my eyebrows waxed, bought shoes and finally decided on a kaftan (rental for one night as they cost around 6500dhs to buy). At the end of it all I was out by about 1000dhs and countless hours of my energy, but I had a kaftan I felt good about and I learned a lot about how to do it better next time.

I also became a lot closer to one of my sister in laws who took me under her wing to secure my adequacy. So here is a big big thank you to Soumia. Thank you for taking me to the doctor in the middle of it all, taking me shopping everyday of the week last week, and calming me down through every hormonal tear filled out burst that I experienced through out the process! Thank you for talking me into attending the henna party the day before the wedding and not wearing a dress but instead just wearing the damned kaftan I had been given for the day.

~How I Feel about Paris today~

I really miss Paris sometimes lately. I want my babies to know the city and sometimes I long for it. I long for the food and the sidewalks and the fact that I was always single and childless and not with swollen belly while there. The truth is though, I love it that I have that time. The time I had in Paris and Atlanta and everywhere else in between that I traveled to. I am thankful that I am pregnant now and the woman that I was before this took that time and went to those places and walked around without swollen belly, ignorantly blissful and eternally suffering.
Posted by A Brilliant Life at 3:43 PM

Love you Carrie! Thanks for sharing.
Dawn