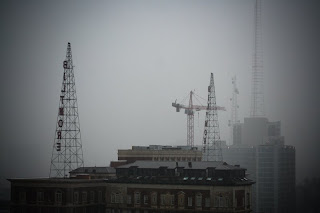 It is raining in Atlanta. It is late January, almost February. It is a warm, nostalgic rain with a blanket of grey pushing an urge to cozy back into bed. I am packing almost packed. The best and worst of my lovely possessions are being given away, almost gone.

I announced my resignation to my student’s yesterday. I tried to constrict the mile-wide smile from attacking my face as I said the words, “ I have accepted a position over –seas”. I then announced my successor and the students clapped and it was all over. They came up to me afterwards with their smiles and questions and well wishes. It was nice.

As I am writing this, the wind outside has gone from a light trickle to a raging soulful, windy rain. It is knocking over objects on my porch and threatening to collapse the elder trees in the yard. And then it is gone again. This storm is reflecting the pattern of my emotions at this point. I go from a calm serenity to excited and happy to a raging, destructive, out of control fear and panic. And then it passes again and the cool air resumes itself where it should be on a late January day.

And I am off to continue to box the past two years of my life, donate it to people who need it and then start over again.
Posted by A Brilliant Life at 4:11 PM 1 comment:

And go…the language learning begins anew today. Did I ever tell you I spent two years of my life studying Arabic? No, well that’s because it was one of the most demoralizing undertakings I have ever…well…undertook. So, what am I doing instead of getting ready for work on this cold mid January morning in Atlanta? I am studying Arabic again. I gave it two years last time because it mattered. I would be lying if I fronted like it doesn’t matter, oh my goodness me, Arabic is such a pain, blah, blah, blah. Yeah right. The reality is that Arabic is the one challenge I could not conquer, the one ambition that left me blind and defeated, high and dry with a sore throat from practicing that little sucker you see at the top of the page. I wrote a poem to that letter once…about the way it tortured me.

I used to go straight for hot tea with honey after class so that I could go at again the next day. I was obsessed. I used to lock myself in these little glass rooms in the university library because they had white boards in them. I would write sentence after sentence after sentence of memorized script. I would stare at the board and repeat the sounds until none of it looked different anymore. I tried really hard, I swear. It is no surprise that during the hour before my last Arabic final, while studying in the library, my back seized up and before I knew what hit me I was on the floor unable to move. I had to be taken to the emergency clinic on campus and was given a heavy does of painkillers. I suffered from back pain for about a year after that. I am still afraid it will come back.

I showed up to that final though. My teacher told me I looked like hell and that there was no way he was letting me take the final. I begged. He let me in the class but said that if I failed the test he would not average it into my grade. I am not sure how I did on that thing, but I think I made a B overall in the class.

So yes, going back in for more now. The difference this time is that there will be no grade or grade point average following me around. Further more I will finally have access to the thing I then spent the next year obsessing over in socio-linguistics, the Moroccan dialect of Arabic. If you want to more about that click here.
Posted by A Brilliant Life at 1:56 PM 1 comment:

Life is a Circle 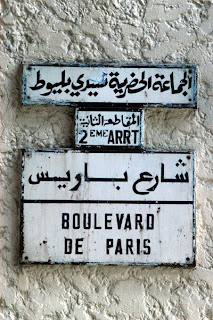 Everything the power of the world does,
is done in a circle.

The sky is round
and I have heard that the earth
is round like a ball,
and so are all the stars.

The wind in its' greatest power whirls.
Birds make their nests in circles;
for their's is the same religion as ours.

The sun comes forth and
goes down again in a circle.
The moon does the same
and both are round.

Even the seasons form a great circle
in their changing
and always come back
to where they were.

The life of a man is a circle,
from childhood to childhood.
and so it is with everything
where power moves.
*

What is the truth about it? My life right now feels like one gigantic fruit loop back to exactly where I started out 12 years ago. I live approximately 4 blocks away from where I started “my adult life” in this city, on the same street.

Fast forward 4 tumultuous years from that point, to me heaving and naked, choking on my own tears, awoken after 2 hours of sleep and days of drowning the pain of the call I received from him, my Youssef…telling me it was over.

So there I am in, (in Paris… of course) on the mattress in my friend’s boyfriend’s studio (they were vacationing in Fiji…of course) having one of the most defining moments of my then 22 year old life. I was laying next to my lover at the time, a man that I was in the middle of leaving. I was unclothed and it was dusk and we had slept so little for so many long days of drinking and fighting and crying and screaming in the back of taxicabs. We had started out that week together wonderfully. He let me unbraid the 100s of curly little braids on his head. I remember how soft his hair was. I made a Dijon chicken in the toaster oven about 5 nights earlier. The carcass sat on the counter to remind me of how nicely our time together in the studio started out. It was a very different vibe on the day that held the scene I am describing now.

Fast-forward again to the 29-year-old girl now glued to her couch surrounded by half packed boxes and the scattered treasures of excavated closets. I am contemplating the move I am making now. Where it began. Where it really began and if it means what I am beginning to feel that it means.

Morocco was before France. Casablanca was before Paris. I went to Paris because I wanted to go to Casa. I moved to France because of all the Moroccans in Paris. Paris was the closest place to Morocco that I could still be on my own and be connected to Morocco. I felt that moving to Morocco and being surrounded by Youssef’s family would be too much for me. But there was always the plan for him to join me. The plan that shattered into 50 million pieces just a couple weeks before the scene I described above.

I did, eventually, go to Morocco. On my own, of course – I have journals to prove it. Journals in which I wrote that I understood that I wasn’t ready before that time. Entries in which I speak of how comfortable I felt there and that I was exactly where I was supposed to be in my life at that moment.

So, the circle is thus. Am I heart broken…again, worse than I have ever been, and running away from the situation into a comforting and long standing relationship with a place OR am I finally going where I always wanted to go anyways?

Am I finally closing the circle and stepping bravely into my magical, brilliant, future? Do I live on the same street I lived on when the concept of Morocco entered my life and have a job in Morocco right now because that is where I am meant to be going or because I am repeating incredibly fucked up patterns?

The thing about being betrayed so badly by Hugo is that I don’t trust anything that I want or feel anymore. Every part of my heart is so shattered that I don’t feel fundamentally capable of making the right decisions for myself. I don’t know if I believe in love or not. I don’t know if I think I am entitled to a brilliant life anymore.

This is what I do know: I have a ticket out of the country in less than 2 months. I have a job contract in Casablanca that begins in March. I am spending time in Paris with some very good friends before I fly off to Casa. I have given my landlord notice and I have resigned from my job. I am doing this. I am leaving. I will be there for at least a year and I am sure it will enrich and develop me as a person in more ways than I understand right now.

Maybe the rest cannot be known from here.
Posted by A Brilliant Life at 1:12 PM 1 comment: