I am really really enjoying this world cup, but it is with, at times, a heavy heart. The games, the nations, the excitement, the analysis of the players and the significance of the teams...It all reminds of the last world cup. How different my world was four years ago. How not a single thing is the same. I literally, sat in a bar last night with my husband, my kids at home with a sitter, having a cold draft, watching the game on a large screen while thinking, "is there any one thing the same about me?". I contemplated this for a good five minutes and decided that the only thing the same about me sitting watching that game last night and the girl that sat in bars and watched the game 4 years ago is that she has the same eyes. It was the same eyes watching the game. Some parts of my heart are the same, but many many parts are changed forever. New people and places now occupying previously empty spaces in there.

It was the first time in MONTHS we had gone out for a drink. And it would have been so much easier for me to stay home, not to insist, put my babies to bed, extract my joy in life from them and their little angel faces and smiles and sweet soft skin. But I chose to go with him, I chose to insist on he and I being alone, however inferior we are to them, for the evening. To watch a game in a bar, to have other interests, other things to share and discuss. And we had a blast - A blast. We decided to do it again, for the final.

Also, on a side note, how cool is it this world cup is all about Africa and I live in Africa? I love it, love it, love it. The games are on a VERY convenient time schedule for one thing and I feel somehow united, somehow a part of it.

Ghosts, the ghosts of my world cup past, do haunt me. It is not lost on me. Watching Spain and Serbia and knowing the other three are out there, watching, analyzing, celebrating, maybe boohooing it a little, thinking of us all, thinking of the times and the games and the memories of us all together to argue and make fun and become excited over it all...it is not lost on me. I am not separate from those memories. It is a little hard to digest at times. So I sit with it. And I watch.

And I know that the memories that fill my head four years from now, will be so excruciatingly different from these. The memories that fill my head four years from now will be of little bald headed babies that I carry from room to room, that run around this huge apartment in their walkers and that we put to sleep at half time. The memories will be of breastfeeding them one by one while watching the end of the game and then slipping out into the living room to analyze the game with him. There will be memories of me riding around on the back of his scooter, singing 'si yo fuera Maradona' and watching Maradona youtube videos and my husband filling me in on "the schools" of football, The Brazil School, the Argentina School. Each world cup I find new idols. Last time it was Zidane, this time it is Maradona,on the sidelines, slapping butts with his rosary wrapped around his fingers. (I know, welcome me to the world out from underneath my rock).

Such a wonderful, magical, precious time in our lives will be fondly remembered, I am sure, with a heavy heart and teary eyes at the next bar, over the next draft, in another four years (wherein Youssef swears that we will be watching in Brazil...and I smile, 50% because I believe him and 50% because I have heard it before, from different lips, concerning different places). Damn I love the world cup.
Posted by A Brilliant Life at 8:55 AM No comments:

I miss the creativity of American Life 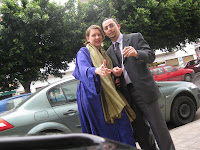 I probably need to read back through this website to remind myself a little bit of the things i don't miss. One thing I know for sure is that I miss the inherent creativity of life in America. I miss the possibilities to grow your own food and raise your own chickens and the art walks and the parties and sense of community. In Morocco tradition rules. You cannot even be creative about the food you serve and in what order it must be served at parties. The American in me is always trying to mix things up, try new recipes, inflict my sense of culinary adventure on potential visitors and party guests. But that is not how it works. That is scandalous. So when the girls have their first birthday party/announcing to the community that two new muslim babies have been born traditional things must happen. No venturing with recipes, none of my veggies and mole enchiladas served up. Will there be cake? Yes but it will be store bought to serve everyone from the finest patisserie so that people won't call us cheap or comment nasty things about us. The same food and the same procession of drinks - first juice, then mint tea, then sodas will be served in that order.

As a visitor to this country and a guest at one of these parties it is down right charming, the tradition, the magic, the wonderful cookies and the yummy dishes served, the traditional clothing and all of the people gathering for hours to chill out and eat without alcohol. But as a resident of this country and someone who attends these parties on a regular basis (though I do still love getting the invites) it feels downright suffocating (and tiring and expensive to do it right).

So we compromised (which is what an intercultural relationship is all about). We will have two separate parties. One for their birthday and that will be ours and we will invite friends and I will make whatever I want to make and we will celebrate making it through this year and the other for the community (and for their Dad so that his obligation to do this is fulfilled) and we will invite everyone and their mother (literally). Oh yeah and we will have to slaughter two sheep at the community thing. I don't have to watch. And they will be donated to charity, which I like. Poor people will eat good meals because my daughters were born.
Posted by A Brilliant Life at 8:33 AM No comments:

And then there were four

So, it has been so long since I have updated because I have not been able to access this thing. I have had so many thoughts come and go in the last two months. There is no use in me trying to recapture them. I will just...update - document where things are at now.

Sophia has two teeth. TWO! She spent all of last night nursing and chomping the air, I think she is in pain. Mae cries out loud in her sleep all the time. She only has one tooth currently, but I am sure her second is soon to follow.

They have been to the beach twice so far and the pool once. They LOVED the pool. The loved the floating around and swimming on my belly. Youssef dunked them. It was good fun.

I am finished for the summer in one week. ONE WEEK! One of the best parts of being a teacher is, I think, that you get to be a full time mom and wife for part of the year but you don't have to be committed to that all year long. I am so looking forward to that time with my family. And about family...I can't wait to go home and see the rest of my family and friends, and eat Mexican food, and scratch Shaka's white patch underneath her mouth, and kiss her furry face, and have a glass of really good wine, and sit on porches, and walk the field in south Georgia, and visit the graves with the girls. Introduce them to their heritage.

I hope that I will miss my life here. I hope that i will see that it is not that bad. I hope that I will come and back and be fine with life in Casablanca for a bit longer. I am sure I will do all of that. There is a part of me that already knows I will miss this place and even long for it after a bit. Of course, half of my heart wills till be here with Youssef so there is that. But it has also become home. When I am here I only have the home that i com from to contrast it against. I am looking forward to being in that home and feeling like Casablanca is home.

I know for certain that I don't want to be here forever, but I do want to feel good about being here in the time that I am here.

~How I Feel About Paris Today~
I have been Paris longing again. It never leaves me. The desire, the fire inside of me for Paris might look like it has gone out, but it is as a flame that can be seemingly extinguished by the wind but as soon as the wind calms you see its jump back up again. Paris holds my soul. For now, forever.
Posted by A Brilliant Life at 8:12 AM No comments:

I can't believe I got access to this! It has been over a month since I have been able to post and so many many thoughts to publish. I will update soon!
Posted by A Brilliant Life at 7:37 PM No comments: