The Names of My Daily Life 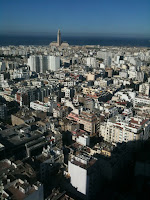 So so many names, where do I start?

There are three Fatima's, one of them my daughter, the other her grandmother and the other a maid. There is a Sophia, my first born daughter, a Safia, my first Moroccan friend here and a Soumia my closest sister in law. Soumia has a Sara and there is another Sara that is my good friend. There are two Souad's, one of them a name I say everyday all day as she is my daughters' nanny. There are two Leenas and one Lila. There is a Riyad, who brought me here. There is a Hasnaa and a Houda and an Asmaa and a Mounia. There is another Fatima who is kind and meek that I work with. There is a Boubcar that I get copies from and a Karim that prints out pages for my lessons. There is a an Anouar that assigns me classes I don't want and a Hassan that I am constantly trying to get money from (the accountant). There are two Aicha's and one Jasmina. One Kenza and two Zinebs. There are two Ghitas (pronounced Rita). There is a Hamid and two Mustaphas and one Martin. There is a Faiza and an Issam. There is an Abdel Haq and a Nabil who were there when I married (again) There is only one Youssef, one Mae and one Sophia. I am the only Carrie I know.

This does not include all of the students, oh the students beautiful names: Ghizlane and Camelia and Khalid and Khadija and Ayoub and Alla Eddine... so many others!

The streets that I walk on and the neighborhoods I inhabit: There is Ziroui which I live on and you pronounce that Zirwowi. It intersects with Zerktouni which takes you to the Maarif and you do all of your shopping there. For the beach there is Bouznika and Tamaris and Ain Diab for ice cream. There is Ghautier, the neighborhood I work in and Souktani and Jean Juares the streets that intersect at l'embassie Italien. There is Jean Jaquesman and my favortie rue Dejla. There was a Galilee that I went to everyday but then Jill left and now Martin May lives there but I don't go to visit him. There is a Nousair which intersects with Galilee and there lies our favorite bakery. There is Moulay Youssef just up the street from that. It is lined with beautiful palm trees, looks like california and holds the American Embassy. There is the park de league Arab, one of Casablanca's only green spaces. Around the corner is Oliveri which has the best ice cream in town. I wrote the frst letter to my daughters there after I found out I was pregnant, in between teaching a class at Axa, the major insurance company who I covered with.

Now there are new names and neighborhoods. There is a Oasis in my life now, pronounced like Waziz. There is a rue de Papillion which I am so excited about because it means butterfly street. Now Brahim Roudani and blvd. Ghandi will be in my daily life as well.

So many many many names. This is a glimpse into the string of vowels and consonants that pass through my lips each day.
Posted by A Brilliant Life at 8:15 AM No comments:

Ummm, total update on the lemon post!!!!!!! They are called Bergamots and they are totally a thing. I thing that is usually used to flavor earl grey tea actually!!! So excited to live in a country where BERGAMOTS are this plentifull!!!

Thanks David Lebovitz!!
Posted by A Brilliant Life at 10:13 PM 2 comments: